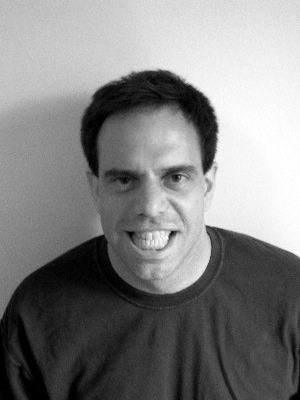 You could say Justin Courter is making a big stink in the literary world. His debut novel, Skunk: A Love Story, about a young man’s attraction and addiction to skunk musk and his love interest in a woman with a fish fetish, is probably one of the most olfactory-obsessed, if not strangest, stories I’ve ever read. I recently interviewed Justin for the first in the series of Sunday Salon Interviews.

Nita Noveno: What inspired you to write such a bizarre story?

Justin Courter: Satan. No, actually, I often look at writing stories as a way of conducting little experiments. In this case, the assignment I’d given myself was to write about something repulsive that would also be interesting and funny enough to make a reader stay with it. I’d always felt that the raw material of a novel does not matter to me so much, that what’s important is that there are amusing characters, a voice, and a story that you want to continue to see unfolding. So this was a kind of extreme way of announcing that. Also, I think that if you can incorporate fantastic elements—in this case an absurd addiction and a bogus invention—it can add another dimension to a story.

NN: Who influenced your writing then?

JC: When I was writing Skunk, I was reading Graham Greene, Roald Dahl and T.C. Boyle, and I think their influence is pretty obvious. Franz Kafka, Anne Tyler, Tom Robbins and Helen Barnes were also influencing my writing then.

NN: Did you base the main character, Damien, on any one particular model, real or imagined?

JC: That’s a good question. The answer is no, but consciously and unconsciously I incorporated aspects of the personalities of people I’ve known and characters from other novels. I’ve seen in some alcoholics the hyper-controlled/totally out-of-control tendencies that Damien displays. And after I’d gotten halfway or so into the novel, it occurred to me that Damien was similar to the protagonists of Anne Tyler’s The Accidental Tourist and Graham Greene’s Travels with My Aunt.

But I think the main thing is that in writing Skunk, I thought a lot about juxtapositions. Since this character was going to have a strange, impossible addiction that leads to dissolution, it seemed appropriate to have him be very practical, uptight and pedantic. That was the logic out of which Damien came to life. He’s also extremely neurotic, isolated, a complete social misfit. And that kind of person has the freedom to try things that people with social ties don’t.

NN: That’s an interesting observation about the freedom of those who don’t have the social ties. The essence of Damien’s character seems captured in this sad, funny line, “Freedom is not to have to smell other people.”

JC: Yeah, I guess you could say that is the essence of his character. He really is a loner.

NN: How did you decide on Damien’s language, which is consistently formal and proper, more British than American it seems?

JC: Yes, his tone is very formal and I wrote it that way as part of the character. I wanted the contrast of an extremely proper voice with extremely improper behavior. Damien has spent most of his life reading books — he sees them as his companions — rather than participating in any social activity. He doesn’t even speaking to people. Damien says at one point that he despises contemporary novelists and sticks to the classics. So when he does have to speak to people, he talks like someone out of an old novel.

NN: So could you describe your writing process for this book?

JC: I started writing with only the idea of someone making this discovery—that skunk musk could give you a high that would be similar to what you feel when you’re on an opiate—and Damien’s voice. I thought at first that I would write a longish short story but I was itching to write a novel and found that I liked where things were leading. So I had to rethink it. I sketched out a vague plot with more characters, other subjects to cover, some turning points, and developed a general idea of what was going to happen over the course of the novel. Then, before I sat down to write, I’d sketch the next few scenes, making notes about new characters, little pieces of research and dialogue I wanted to get in. With an idea of where I was going, I’d find it easier to be spontaneous along the way.

NN: You have such detailed descriptions of skunk behavior. Did you do any kind of research on skunks? Observe them in the woods? Or actually find out the contents of their spray? And have humans ever used skunk musk for anything? Like, for example, weaponry?

JC: I didn’t observe live ones. I went to the library and got out books about skunks and learned a little about their behavior, what they eat, and so on. Skunks spray to defend themselves, and they will first stomp their paws, hiss and raise their tails in warning. I wrote this in 1997, and people weren’t using the internet much yet — I certainly wasn’t — but I’ve since gone online and found all kinds of sites and chat groups for and about skunks and people who keep them as pets. I think what people do is have the skunks’ musk glands removed when they’re still very young.

As far as I know, skunk musk isn’t actually used by humans for anything, but it would be nice to have a little spray bottle of the stuff to squirt at people who fart on the subway. I think that definitely could be marketed effectively.

NN: You might have something there. This idea of a SeaLawn, invented by the whacky, brilliant Pearl, Damien’s love interest, is pretty wild too. How did you come up with it? Is there anything in real life that comes close?

JC: Most of the credit for SeaLawn has to go to Ken Keegan, my publisher and editor. Previously I’d had another invention for Pearl that he didn’t think worked as well and I think he was right. Ken’s idea was based on things that are out there — it is possible to produce hydrogen, which can be a great, clean, fuel source, from algae. I think the problem is that it’s difficult to produce enough of it from algae. I came up the specific qualities of SeaLawn, and the idea of it becoming a free-floating weed that could potentially be dangerous to the planet. So it was definitely a collaboration that resulted in a Frankenstein.

NN: I find it ironic that you work at the Bronx Zoo. I know your job as a grant writer came after the book was written, but do you see animals in a different light now? Are they providing you with inspiration for a future story?

JC: I’ve always liked animals. And I’ve always been interested in animal behavior and in how it sheds light on human behavior. And yes, that’s part of the reason I wanted to work at the Wildlife Conservation Society, even though I don’t work with animals. I’m a Development Officer in Foundation Relations.

I once wrote a story in which a man marries a baboon. In my new novel, there is a minor character who is a field vet, whose job is like that of one of the field vets here at WCS. In the novel there is a disease that is spread by humans eating animals who’ve eaten humans, and I describe a little of the barbaric, inhumane conditions in modern slaughterhouses. So yes, animals continue to factor into my writing, in different ways.

NN: Can you tell me a little more about this new novel?

JC: It is similar to Skunk in that it is a satire that involves addictions, much of it takes place in the American heartland, and the activities of the characters will affect the rest of the country. But most of the things people do in this novel are things people have actually done. There is no science fiction. The story involves a cannibal who’s on the lam. He winds up in a town run by a polygamist, pedophiliac Mormon fundamentalist “prophet.” The heroine is a young girl who is trying to escape this nightmare town and the clutches of the prophet. The tentative title is Keep Sweet. So, more weirdness to come.

Justin Courter’s work has appeared in many literary journals, including Pleiades, The Northwest Review, Fugue, The Literary Review, LIT, The New Orleans Review, and the anthology Paraspheres. A collection of his prose poems, The Death of the Poem and Other Paragraphs, is forthcoming from Main Street Rag Publishing. He lives in Queens.

Skunk: A Love Story is published by Omnidawn Press (June 2007) and is available for purchase at: www.amazon.com or http://www.omnidawn.com/courter/index.htm