My grandmother has $7,000 under her mattress in case she has to flee to Israel. My father won’t go to Germany, and he especially won’t buy German made ovens. I grew up in a new era, the politically correct environment of an East Coast American suburb. As a third generation Jew of an assimilated non-religious family, it was my job to forget. Not only did I think my family was crazy for holding a grudge, I had German friends.

There was a great divide between my generation and the ones that had lived through the Holocaust. It was their identity. To me, it was a history lesson. I was lucky. I grew up far away from anti-Semitic sentiment and the shtetls of Europe. It wasn’t my story to tell. I didn’t have lost relatives or scattered cousins throughout the world like other Jewish families did. We came here before the war and changed our names at Ellis Island. We assimilated quickly and focused on establishing financial security in the new country. I didn’t go to temple or fast on Yom Kipper. My culture was based on New Jersey malls and Bon Jovi. I liked it that way; we all did. I represented rebirth. We lived in a bubble where peace surrounded us and the genocide was… done. Yet, sometimes in the safety of my suburban lawn, this legacy of death would shadow me. My grandmother would yell at me for dating a non-Jew, or the TV news would report that someone had drawn a swastika on a school door. And I would realize that it wasn’t completely over.

I read “Night,” watched “Exodus” and “Schindler’s List.” I tried to dissolve the cloudy haze that had been separating me from the past. But these stories remained distant and my understanding was dim.

So when my friend (also Jewish) and I went backpacking through Europe during the summer of ’93 in our junior year of college, I was looking forward to learning more. I hoped the buildings, museums, and squares would fill in the gaps of the past to create more meaning. We wandered the European cobblestone streets looking for bits of information that might give us a better sense of what it was like to be Jewish. There weren’t many clues. We weren’t able to spot the leftover pain in their Jewish faces or fear in their posture as they walked by us.

Instead we visited all the tourist attractions that were written up in guidebooks and rated as a “must-see”: The Ann Frank house, Prague’s Jewish quarter, and Dachau. There we hoped we’d get our answers.

At the Ann Frank house, we waited in a crowd for twenty minutes on a long narrow staircase that led up to the attic to see where the little girl and her family hid. It was dark and we were packed between the walls like cattle. The woman on the step below had a big square bag with sharp edges that poked my waist. I leaned my body forward in an uncomfortable position. I turned to say something to her, but she scowled at me.

When the line began to move, the crowd pushed me up another step. At the top was a small nook with a moveable bookcase ajar like a door. Patterned paper covered all the windows. The crowd gasped. The apartment was dark and not as small as I was expecting. It was bigger than my New York apartment with enough room for four people to walk around and be comfortable. Pictures of film stars and the British Royal family remained on the walls. Brown furniture was arranged like any home. The line continued to move slowly along a narrow space defined by frayed rope. The tourists were loud and chatty, and they snuck flash pictures under a sign that read, “Please no flash photography.” I wanted to stay longer, to feel the family’s fear, but the crowd pushed me forward.

At the end was another long staircase leading down. It was also full. “Oh how horrible, how awful,” everyone said as we waited at each step to move towards the exit that emptied into the museum gift shop. My friend and I both bought a book.

In Prague, we learned about the Jewish Quarter. At one time, it had been walled-off by the Pope. Now, the ghetto had become a neighborhood of crowded museums. We stood in one based on Hitler’s “Museum of an Extinct Race.” It had been his dream to take all the Jewish relics he had pillaged and display them for everyone to see.

There were a few small white rooms, well lit with clean glass display cases that held silver menorahs, Passover plates, and mezuzahs. Each artifact had a cold, short description of its significance and how it was used. 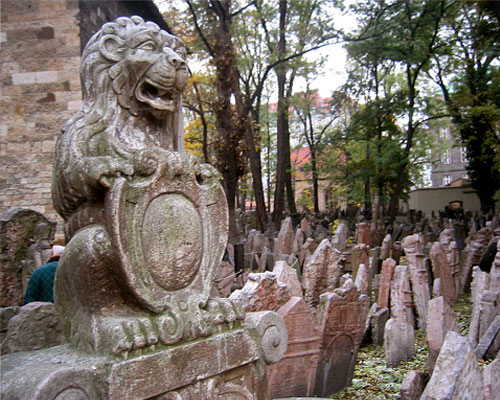 When we got to the Old Cemetery, which was not a Holocaust site, it felt more relevant. Most of the tourists were there, crowded around a small plot of land stuffed with tombstones, surrounded by a rope. Bodies were stacked there up to twelve-layers deep dating from the Middle Ages. We walked around them in a slow line, like a conveyor belt. Stone slabs with Hebrew letters protruded from the ground, packed so close together there were more tombstones than grass. Some were tilted, some had fallen, some were leaning against each other like loose books on a shelf. The collective voice of the crowd was loud. Their cameras and flashes snapped like paparazzi, more flashes than tombstones. I took a few pictures as well and then wished I hadn’t. Small flickers of light danced on their graves. My body felt sore, as if it had been beaten.

I was excited to finally get to Germany, and in between the beer gardens and apple strudel, we went to Dachau. A backpacker in our hostel said that Auschwitz was better. He said it had more pictures and stories. He said there were huge piles of hair and shoes all taken from the dead. It did sound better. But because my friend didn’t want to go to Poland, I settled for Dachau.

The bus ride there was like a class trip. Everyone chatted about his or her experiences in Germany and how good the bratwurst was. I remember I had been away for the last episode of Cheers and another backpacker told me what had happened with Sam and Diane. That seemed so important to me at the time.

When we arrived, I had my camera ready. There wasn’t much to see inside the grounds. The square site was empty and neatly kept. The human element had been removed. Embarrassingly enough, it was a little disappointing. I walked over the pebbled paths holding onto my camera. There were a few cabins in a row. The ovens looked like narrow pizza ovens and the showers were concrete and freshly painted. The barbed wire had been taken down.

A burning acid rose up my esophagus into my throat. I decided not to take any pictures. Suddenly, I wanted to cry and I squeezed all my muscles together to form a tear, but nothing came out.

Near the exit was a beautiful bronze sculpture that read, “Never again.” Beyond the sculpture sat fifteen orange tents. There were fifty Rwandan refugees sitting in the dirt and cooking lunch. There was a cardboard sign in front of them with the words: “You said never again.”

I walked up to the first group. There were three women and a baby wrapped in a sheet. The woman, who was cradling the baby in her arms, looked up at me. Our eyes met. They were dark and hopeless and surrounded by deep creases in her skin. She had dirt on her forehead and a hole in the shoulder of her t-shirt. I quickly turned away from them and headed back to the bus, feeling lightheaded. I wanted to go back and say something to her, give something to them, but what could I do? At that time, I was twenty and I didn’t know anything about Rwanda or NGOs.

The bus ride back was long and silent. We kept our heads down and refused to make eye contact. It didn’t matter what religion or race we were that day, or what country we were from. We were all tourists forming a new culture and we had forgotten.

By Victoria Brown For their fourth date Aneeta decided to move her relationship with Phillip forward, a step. They’d gone the first night to Vanderbilt,