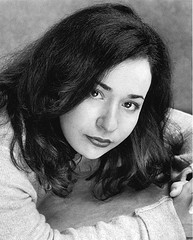 Felicia Sullivan has been described by a fellow writer as a “force of nature” and rightly so. The native New Yorker and Columbia MFA graduate completed her memoir The Sky Isn’t Visible from Here while working full time. Felicia is also the co-founder of the KGB Non Fiction reading series in NYC and the award-winning literary journal Small Spiral Notebook. I caught up with the tireless writer after her reading at June’s Sunday Salon.

Nita Noveno: When and why did you decide to write this memoir?

Felicia Sullivan: In some way or another, I’ve always written about my mother. When I was eight I published a haiku that likened my mother’s voice to thunder. She’s always been my subject—I can’t really recall a time in which my work hasn’t revolved around her—the one person I couldn’t, but desperately wanted to, understand. For years I was working on a novel of lifeless, unlikable characters that did mildly interesting things. I was writing a safe book because I was afraid to commit my memories, this horrific life lived, this very unsafe book, to paper. I was ashamed of my past, of living in poverty, of a mother who loved and terrorized me. I had lived a life of my own invention for so long, I couldn’t imagine otherwise.

At one point the weight of these two lives—the accomplished, in-control professional and the frightened child who never really mourned the loss of her mother—were becoming difficult to bear. Something had to give. One afternoon a friend of mine and I were trading stories about our mothers and we realized that we had both been shamed into secrecy. We were made to feel shame by our mothers, our impoverished upbringing, and a culture where not loving your mother is unthinkable.

I wrote this book as a testament to my strength, as a celebration of my survival and recovery, to demonstrate that alternative families are possible, and that love – the most sacred of emotions – is not unconditional.

NN: What was the most challenging aspect of writing this memoir?

FS: Writing this book was at times frustrating. Because I was trying to render the most accurate portrayal of my life with my mother, I was consistently confused—caught between the memories my mother created and the events that actually happened—and found myself second-guessing events that had happened. In the cases where memory wasn’t reliable, I chose to keep those chapters out of the book. In other cases, such as in the chapter “The Burning I Don’t Remember”, I make a point to highlight how powerless I was against the history my mother invented for me. I have scars on my legs but I don’t remember how they got there. Do I believe my mother’s story that they were burned in a bathtub and a hospital trip that I don’t recall? Do I have any other option?

Regrettably, my mother excised all members of my family so accessing them was difficult because, embarrassingly enough, I don’t remember many of their last names or have any idea where they might live or whether they’re even alive. I did rely heavily on Gus—the man to whom my mother was engaged but never married, the man who I would come to call my father—to fill in the gaps. He was in our lives since I was twelve and he was privy to my mother’s confidence, which lent a great deal of perspective and sympathy to how I rendered her in the book.

Essentially, I wrote this book as honestly as I could, given the limitations. My mother tended to overuse certain phrases and I was in keeping to how she, and other characters, spoke and what they would say. But memory is a tricky thing, it’s fallible, and in the end, I wrote the book and the events in my life as I remembered them.

NN: You have founded a reading series (KGB), a literary review (Small Spiral Notebook), and host a blog talk radio show, all while writing and maintaining a full-time job. Phew! How did you manage it all?

FS: I’m a multi-tasker. Sorry, it’s not fancy or fabulous, but I know how to best organize my time to get what I need done.

NN: Do you have any words of wisdom for your fellow struggling writers?

FS: The very best gift you can give yourself when writing a memoir is distance. I think that it’s critical to discern the difference between cathartic journaling (which is integral in documenting and coming to terms with any traumatic or trying period of your life) and creating a work of art from that experience or series of events. I know this is a bit cliché, but for me, it was paramount to see the forest from the trees. Writing raw is not the best way to attempt writing a memoir. Time allowed me clarity to shape the book, render the characters sympathetic and have a deeper understanding of the events in my life from the vantage point of reflection.

FS: I’m working on a novel, yet I think it’s a bit premature for me to talk about the bones of the story. Although I can say that it will be a novel focused on technology and how it disconnects people, a character will have Asperger’s, and there might be a compassionate serial killer thrown in for good measure.

You can find out more about Felicia at: feliciasullivan.com