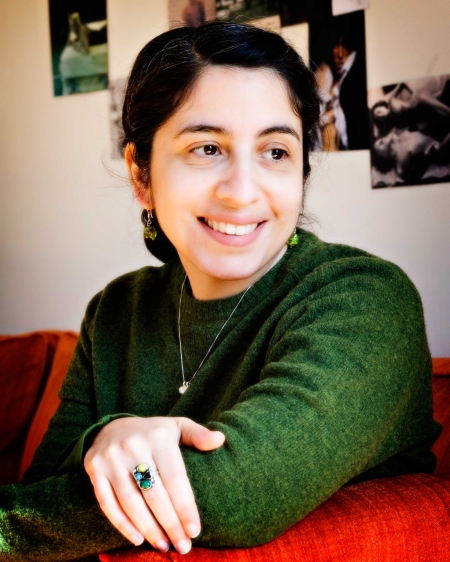 Her soft-spoken demeanor might fool you, but Nancy Agabian packs a wallop in her prose. The author of Me as her again: True Stories of an Armenian Daughter, Nancy writes about family, identity, and genocide with a critical eye, insight, and compassion. Her stories are provocative and humorous, just the way we like them. This generous, tireless writer took a break from her busy teaching and writing schedule to answer a few questions for Sunday Salon.

Nita Noveno: Nancy, this book sprang from the experiences of your Armenian family, specifically, your grandmother’s escape from genocide. What ultimately compelled you to write this story?

Nancy Agabian: In the early 90s, I had been writing poetry and doing performances about my Armenian identity. Though I knew that the Armenian population of the Ottoman Empire had been wiped out during World War I, I had only a vague notion of what had happened to my grandmother. And then she passed away in 1993. But five years later my aunt invited me to go to Turkey to find the village that my grandmother and her family had been banished from. We were on a tour with elderly Armenian folks looking for the villages of their parents in Eastern Turkey, too. It was an amazing trip for many reasons. I had separated myself from the Armenian community for a long time, since they seemed so old fashioned. But now I was among people who were speaking Armenian and we were all looking at this landscape and the way of life that had been part of our histories. Some part of me wanted to know more of this culture. From my aunt, I also learned more details of our family’s history and my grandmother’s story, which helped to shed a light on the kind of loss she suffered and what she might have passed on to her family. Because she was so young when the genocide happened, and she was just 15 when she made it to the U.S. where she immediately had to start a new life, all that trauma got repressed, and it was clear to me from how I had grown up that there was a lot of shame and repression within our family dynamics. When I returned home, I made a performance, but it was so long-winded and text-based, that I realized I needed to write a book that would explore the connections among the generations and the way that loss permeated our family and culture. In the process, I learned a lot about my family’s history and my Armenian history. The book is a kind of reconciliation with my Armenian identity.

What were the challenges in writing this story?

I had way too much material. I was writing a narrative of my coming of age, but also trying to write my grandmother’s story, as well as my mother’s, since she too was dealing with loss, though in a different way. I was also writing about my three aunts who never married and lived with my grandmother, so they were an example of this old fashioned Armenian culture. But then my brother and sister both came out as gay, and I as bisexual; just one gay kid in an Armenian family was rare in the late 80s, early 90s, never mind three! So it was hard to know what stories to focus on, among these three generations. I did a lot of drafting to explore what the crux of the story was, and to find an appropriate relationship between my family’s stories and what had happened to my grandmother. At one point I had 1000 pages. Most of my process was editing; I think I did eleven drafts.

So what kind of response have you had from your readers?

Mostly positive. Recently, a book group at an Armenian bookstore read Me as her again and told me that their meetings were almost like group therapy, because they could relate so much to the Armenian family stuff. But then I did a reading in Illinois, and one woman emailed me afterwards that she’d read the book in a few days; she said that though she wasn’t Armenian or bi, the story really pulled her in and she related to it.

There is a lot of controversy surrounding the Armenian genocide. The Turkish government doesn’t acknowledge that it ever even happened. Recently (in early October 2009), the heads of Turkey and Armenia signed a pact to open up relations between the two nations. What are your thoughts on this event?

In general, I’m happy that they’re moving towards reconciliation, though it’s being done mostly for economic reasons. One part of the agreement to move towards diplomacy is to set up a historic commission to examine the veracity of the genocide, which is a concession from the Armenian side. Though most historians agree there was a genocide, and many governments have acknowledged it, the Turkish government has had such a miserable time admitting it (for nearly a century!), that it’s hard to imagine that the commission won’t be tampered with to include denialists. But there have been a lot of changes in Turkey lately. Though Turks haven’t been taught the history of the genocide, more and more Turkish citizens have been realizing the truth, and have even been uncovering Armenian relatives in their families. In the long run, I’m hoping Turkey will become a more open society that will have more cultural ties to Armenia and the Armenian diaspora; opening the border will encourage this, which could bring change in admitting their history and being more fair to all their ethnic minorities. And Armenia will change with the open border as well; I think they’ll feel less fearful of their neighbor, and less isolated and vulnerable as a nation in general.

So now you’re leading a writers workshop on cultural identity. Tell me about it.

When I came back from Armenia I lived in Woodside, Queens, which is low on gentrification and high on immigration. I’d also been teaching at Queens College for a few years and felt badly, at the end of the semester, that I couldn’t advise my creative writing students on where to go for a free or low cost writing workshop nearby. I had actually started writing in a free community workshop, not in college, so offering space for regular folks to write has always been really important to me.  I decided to apply for a grant through the Queens Council on the Arts for immigrants or the kids of immigrants to write their stories, geared specifically for Queens residents.  What surprised me was that people traveled from three other boroughs and New Jersey because such a workshop is obviously very much needed in NYC. We were hosted by Paz and Todd at Topaz Arts Center, a great art gallery/dance space in Woodside, very supportive of all arts. We had thirteen members, and over ten weeks got to know each other better, through our writing and cultural backgrounds.  Folks had ancestry and direct connections from Mexico, Peru, Argentina, Korea, the Dominican Republic, Indonesia, the Phillippines, Armenia, and India. We wrote a lot about our families and migration and discrimination, and it was interesting to find commonalities among us. But the writing styles were just as diverse as the cultural identities. One member, Beatriz Gil, became inspired at a zine fest and has spearheaded a chapbook publication of the group’s work. A little plug is that we are reading from it on November 2, at LaGuardia Performing Arts Center.  More details at http://ourside.info.

Who have been your literary influences?

Practically everything I have read has influenced me in some way, from The Diary of Anne Frank in junior high to Eileen Myles’ poems, to Audre Lorde’s memoir to David Sedaris’s earlier books of essays to whatever I am teaching my English 110 class.

Cool. What’s your next book about?

I went to live in Armenia for a year as a Fulbright scholar from 2006 to 2007. My goal was to write about the lives of artists and how they were dealing with social and cultural changes in the aftermath of the Soviet collapse. I was there when we were in the middle of the Bush hell years, so it was interesting to compare the corruption of Armenia to the corruption of the U.S. But I met and fell in love with an Armenian, so the book will be a mix of things: observational essays, personal journeys, and musings on identity, history and literature. I’m still exploring, so I am not exactly sure what it is, yet…

If you want to learn more about Nancy, please visit her website: nancyagabian.com.