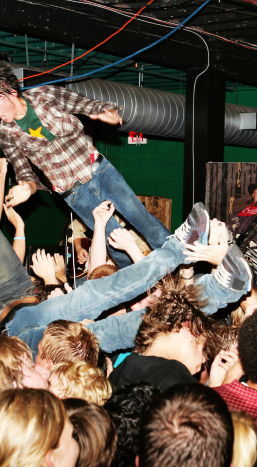 In the seventh grade, I asked my father to take me to see Winger, a glam rock band whose greatest hit, “She’s Only Seventeen,” included the lyrics, “Daddy says she’s too young, but she’s old enough for me.” My father said yes, even though the concert was on a school night and he had no idea what Winger was.

When we arrived at the show that evening, the parking lot was a black sea of T-shirts and spandex. It was August of 1989 in Honolulu, and here at the Aloha Tower concert hall, sweat was about to be sacrificed in honor of metal’s dark splendor. A Filipino guy dressed in jeans cuffed to reveal his laced-up boots leaned against the car next to us. Clutching his waist was a woman in a pseudo bra-shirt and studded leather pants. She was armed with a barrage of thick gold bracelets, each etched with her Hawaiian name in black calligraphy. I was wearing a long white T-shirt with a doodle of a spiky-haired character named Fido Dido, whose smile was a confused squiggle against my flat chest. A plastic clip, the same shade of pink as my jelly sandals, held the shirt in a small knot at the side of my hip over my stretch pants. Though I’d later find out my father had been to his own share of misfitted rock concerts in his youth, in this moment, he looked like a geezer with his button-down shirt tucked into a pair of baggy Levi’s. I suddenly wondered why I hadn’t asked to bring a friend along.

Walking into the concert hall, I paced myself five steps behind my father. My head swerved and bobbled, unsure of what to take in. Raspy voices bummed cigarettes around me and I brushed up against a tattooed forearm that read “Youth Gone Wild,” an ode to my favorite Skid Row song. Making our way around the merchandise tables, I almost ran into a pot-marked teenager, several years older than my mere eleven. He raised a brow and shot me a smile.

“You want a shirt, girlie?” my dad asked, interrupting my haze.

I glazed over the selection of graphic tees pinned to the wall in front of us. “Uh, I don’t know.” My head had already flipped back around to look for the cute-enough teenage guy. But he was gone.

“I’m not sure we have something in her size,” said the roadie manning the merchandise.

“C’mon, Dad. Nevermind.” I tugged him away from the table. “Let’s keep going.”

He tried to put his arm around me, but I dodged his move, opening my glittery coin purse to dig around for nothing in particular. My dad kept on walking, unfazed. “I don’t know about you, but I’m hungry for some candy and soda,” he said, heading for the auditorium.

I trudged behind him, moving slower and slower with each and every step.

*
My relationship with my father had been relegated to dates like this ever since I could remember. Not necessarily hair metal concerts, but trips to the mall, afternoons at the movies, stops for shave ice, and other short bursts of entertainment where, up until puberty, I was usually bubbling with giddiness at whatever we were doing together. My father worked sixteen-hour days, therefore making him a special guest star in my life, whisking me away from the suburbs for field trips of fun, even when my parents were married. This setup further worked to my advantage once the two of them had split a year earlier; the guilt of divorce had made my dad even more apt to spoil me, and so at eleven, it seemed perfectly reasonable that the man I loved most in the world would escort me to see the man I had a serious crush on.

Kip Winger was the hairy, good-looking poster bear for the loud, showy music that seemed much more in tune with my adolescent yearnings and confusions than the sugary pop likes of New Kids on the Block. In their videos that streamed nonstop on MTV, glam rockers like Kip, or Nikki Sixx, or Duff McKagan of Guns N’ Roses, were letting me into a mysteriously adult world that I was hidden from on my island cul-de-sac. These hair metal bands seemed both accessible and forbidden, clownish and wild, with their exorbitant face paint, booze-spraying backstage antics and grins that widened at the sight of half-naked women. As more childhood dolls came down from my bookshelves, more posters of Kip’s curly-haired chest and five o’clock shadow went up on my walls. I waited every afternoon to hear his singles play on MTV’s daily request show, and I snuck out into the living room on Saturday nights to watch “Headbangers’ Ball” on the lowest volume possible, so not to disturb my mother. I had no interest in kissing Kip or even touching him; I had no idea how to go about those things. I just wanted to experience the loud, unabashed excitement I saw him make on television.

Aloha Tower’s auditorium seemed a little smaller than the arenas I’d seen in most metal videos, but it smelt as naughty as I imagined it would. A mix of stale beer, clove cigarettes and cheap drug store cologne hung in the air as we entered the blackened warehouse space, cleared for a standing-room-only concert. My dad, carrying his box of M&Ms, headed toward the back of the room, aiming for the four lonely bleachers against the far wall. I stalled, turning back toward the crowd that was assembling miles away near the stage. A guy raced past us. Then another. A third belched in my ear. I turned back around to find my dad had already ascended the bleachers. I jaunted to catch back up to him.

I sat at the edge of my seat half-watching the opening band, but spending more time studying the couple with matching teased manes making out near the speakers. Right below our seats, a woman held a mini wine bottle in one hand and stroked her boyfriend’s arm with the other. When she leaned in to whisper in his ear, she licked it.

“Dad, I’m going to the bathroom,” I announced after the opener. He nodded, “Okay.”

In the privacy of my stall, I removed the clip from my shirt and tousled my hair. Then, I lingered for a few minutes in front of the sink to watch several girls reapply their hot pink lipstick.

As soon as I got back to my seat, the room went black, signaling Winger was about to take the stage. People gathered from all corners of the room, pushing toward the front, screaming. I jumped out of my chair.

“Dad, can I?” I asked, nudging toward the stage with the pretty please eyes I used to beg for ice cream on the way home from school.

He swallowed a gulp of his coke. “Go ahead,” he said, leaning back into his seat. His tone was cool, unhesitant. It was another instance of him giving me what I wanted, another testament of our understanding that I was his little girl and he’d never let anything happen to me.

I skipped down the stairs. Midway, I caught myself from appearing too eager and started slowing down. I aimed not for the stage, but for the middle of the action.

I stood in the back of the black-clad masses for a few seconds before working my way between adults twice my size. At four-foot-eleven, all I could see were the backs of T-shirts depicting some band’s world tour ’89. “Pardon me, excuse me,” I said, as I parted through the crowd. The musk of sweat and whiskey now filled the tiny crevices between bodies huddled together, vying for the best view of the stage. Within minutes, I was blocked by a massive wall of pouffed-out heads.

I looked to my right and there was a scrawny guy with hippie-like long hair smiling at me. “Wanna get on my shoulders?” he asked. My bones felt as if they were shaking from the reverb blasting from the speaker stacks off to my side.

“Well, if you change your mind.”

I turned away, wobbling on my tiptoes, peeking between sleeveless shirts and around stringy rattails and over the bare shoulders of women wearing tube tops. I smiled at a girl who bumped into me and I backed away from a man who grunted his way through the crowd, swashing beer on my shoes. After several minutes of this, I ended up next to the hippie again. “See anything yet?” he asked. I shook my head. He bent down in a squat. The drummer tapped his hi-hat, signaling their number one hit, “She’s Only Seventeen.” I looked down at the back of the hippie’s neck, his hair swooped to one side over his shoulder. The crowd roared. Whoo-hoos swelled the room. I hiked up my long tee shirt to put one leg over his neck. And then the other. He rose off the floor and I was in the air.

I was above the cloud of sweat and as high as several other women who were on other guys’ shoulders, women who were seconds away from being topless, their cleavage falling out of their tiny shirts and their legs wrapped around the necks of bulkier guys who stroked their calves.

“I see a lot of beautiful ladies out here tonight,” Kip shouted mid-song, wiping the sweat from under his curly bangs. Women screamed. Men raised their fists in a “hell yeah.” A voice from across the room said she wanted to fuck him. “Yes, lots of beautiful ladies,” Kip called back to her, and then belted out the chorus without skipping a beat. Women continued to shriek his name. Bras swung in the air. A high-pitched squeal escaped from my lips.

When the song was over, I bent down toward the hippie’s face and asked him to let me down and thanked him. I pushed through the crowd as the band paused between numbers. Far away, I found my father in his seat, shaking a box of candy into his palm. I wondered if he’d seen me above the crowd in my moment of glory. I hoped he had; I hoped he hadn’t. I slowly made my way back up the stairs.