A Reading in New York

This article first appeared in The Accra Daily Mail

The arts, it is said, enhance what science makes possible. Those societies that have found the right mix between science and the arts also somehow manage to get the development equation right. It certainly sounds like a cliché but any society that is made up of only science breeds automatons and when only the arts dominate, romantics take over… It’s almost like Kwegir Aggrey’s axiom of the black and white keys of the piano: Both are needed to create harmony.

Two editions ago of The Accra Mail I reported on Vice President John Mahama’s literary pursuits and his book-in-progress, “My first Coup d’etat”. For me it was most propitious, for if a Ghanaian politician at that level would find the time to write, then perhaps we are beginning to witness the birth of the “philosopher kings” which not only Ghana but other African nations need to break out of the cycle of poverty, ignorance, disease and underdevelopment.

There are other Ghanaians of course engaged in similar pursuits – a new corps of young people, who are making serious writing their business and encouragingly some of the most promising ones are young women. There is Farida Bedwei with her “Definition Of A Miracle”, Alba Kunadu Sumprim with “The Imported Ghanaian”, Nana Ekua Brew-Hammond with “Powder Necklace”, Ayesha Harruna Attah with her “Harmattan Rain”.

These are young women with the abilities and capabilities to pursue other disciplines but chose to take the literary path. Farida’s case is particularly poignant. Disabled by a neurological ailment since childhood, she pursued a course in computer programming and has become a competent expert in the field. Defying all odds of her disability she’s been able to take up writing in addition to her “normal” day’s job.

Ayesha majored in Biochemistry at Mount Holyoke College, also in the US. She spurned the medical field in favour of a journalism programme at Columbia where she earned her MSc. It was after this that she worked on Harmattan Rain which was short-listed last year for the Commonwealth Writers Prize, Best First Book, African Region. She has just graduated with a second Masters Degree from New York University.

In New York last Sunday, Ekua and Ayesha joined Jess Row, a young American writer once named as a “Best Young American Novelist” and Cynthia Morrison Phoel another American writer to read extracts from their works: Two Ghanaian young writers rubbing shoulders with their US contemporaries in this very crowded and difficult field. It was not their first public reading and certainly not the last. It is one of the platforms they use to showcase their works and make sales – when possible. Both Ekua and Ayesha have spoken of the immense difficulties faced – from idea conception to distribution and sales – but with determination, not resignation. They held their own against their American colleagues exhibiting the kind of confidence needed to persevere to take over from the Achebes, Ayikwei Armahs, Ngugis and the other African literary giants who are now in the twilight of their years.

Even though over the years different Ghanaian governments have published cultural policies to advance the country’s arts, none has been able to go beyond the politics of it and give it meaning. For the likes of Farida, Alba, Ekua and Ayesha to contribute in enhancing life, they need the support at home to fully actualize their creative potentials…

SALONZINE January 2020 Issue – Submissions Call In the Upside Down: A Nod to Stranger Things These days, it seems more and more as if 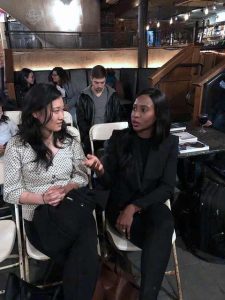